Holidaying at home is the new normal, according to many people in the hospitality industry.

Indeed, if you run a hotel business or property in a prominent vacation destination, you may have found that one of the biggest changes to your customer base since the COVID-19 pandemic took hold is where they’re visiting from.

They’re likely far more local to you than ever before. They may even be from the same town, county or state.

Last September, Forbes revealed the “surprising reason staycations are the new vacations” in America. They pointed out that while the pandemic has undoubtedly had a big impact on the distance people are willing to travel for a holiday, the way in which people take a break from work has actually been changing for many years.

Take the Waldorf Astoria Beverly Hills, for instance, which currently receives 85% of its business from within California itself. It’s a similar story in the UK; back in 2016, experts were predicting millions more staycations and a continuing rise in that type of holiday.

So, that means the staycation is here to stay, but as a hotelier or venue owner, you might be asking yourself one question.

How do I make the most of this golden opportunity for more business?

What is a staycation?

This is a term which actually gained popularity as long ago as 2007 during the financial crisis.

The word ‘staycation’ essentially refers to the preference someone has to holiday within their own country. They’ll still travel to get there and, depending on the country in question, that might indeed require a plane ticket, but they won’t leave the shores of the country in which they reside.

This growing trend is something hoteliers have needed to adapt to, because it represents, essentially, a brand-new, untapped market for most of them. Indeed, many hoteliers will have focused their marketing efforts on obtaining new guests from further afield, therefore the methods for grabbing people who are closer to home is rather different.

In the United States alone, experts believe the recovery for the weekly average occupancy following global lockdowns could take several years. At the moment, it sits at just 37%.

TripAdvisor recently conducted a consumer sentiment survey, which reveals some fascinating insight into the numbers behind staycations. Here are two which stand out:

This suggests two things: people are desperate to get out and want to do so quickly. And you can probably expect that six months figure to increase as 2021 draws on.

The likelihood is that this current reliance on staycations will further cement itself in consumers’ minds as a great way to undertake a holiday. For some, it’ll probably become their default holiday of choice.

Why are staycations so popular these days?

There are many reasons staycations are so popular today. There’s the obvious: the COVID-19 pandemic has made it literally impossible to travel anywhere else for a vacation at the moment, thanks to closed borders.

Equally, people are more fearful of travelling abroad during times of global crisis like this one. As noted earlier, it was a similar story during the world-wide financial crash that took place between 2007 and 2010.

However, there are some rather more positive reasons why staycations have leapt to the top of many people’s priorities. They’re usually a lot more cost-effective and, thanks to no need for long-haul flights, they’re less stressful, too.

There’s also no need to get used to foreign customs, languages or behaviour, either; a staycation is literally home from home.

So, let’s consider the main benefits of a staycation:

Sounds so tempting, right? But if you want to grab this market with both hands, there are a few things you’ll need to keep in mind first.

Things to do before you start marketing your staycations

Before you spend valuable hours on marketing activities, take time to consider these five strategic points.

Prior planning makes a massive difference with any type of marketing, and the staycation market is no different. Do the above, and your hotel will be ready to attack and welcome a wave of stay-at-home guests. 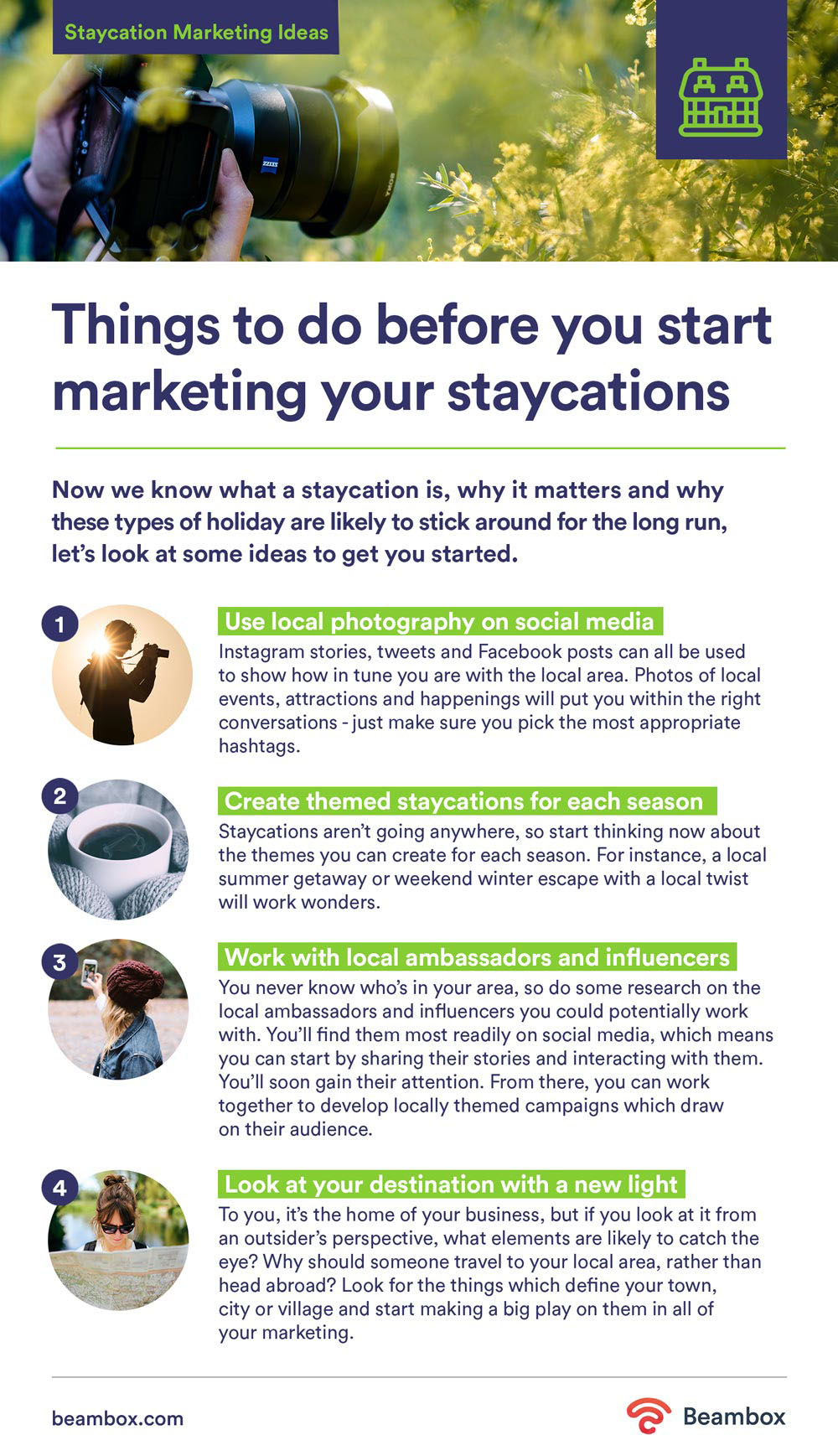 Now we know what a staycation is, why it matters and why these types of holiday are likely to stick around for the long run, let’s look at some ideas to get you started.

📸 Use local photography on social media. Instagram stories, tweets and Facebook posts can all be used to show how in tune you are with the local area. Photos of local events, attractions and happenings will put you within the right conversations - just make sure you pick the most appropriate hashtags.

🏂 Create themed staycations for each season. Staycations aren’t going anywhere, so start thinking now about the themes you can create for each season. For instance, a local summer getaway or weekend winter escape with a local twist will work wonders.

📱 Work with local ambassadors and influencers. You never know who’s in your area, so do some research on the local ambassadors and influencers you could potentially work with. You’ll find them most readily on social media, which means you can start by sharing their stories and interacting with them. You’ll soon gain their attention. From there, you can work together to develop locally themed campaigns which draw on their audience.

🏙️ Look at your destination with a new light. To you, it’s the home of your business, but if you look at it from an outsider’s perspective, what elements are likely to catch the eye? Why should someone travel to your local area, rather than head abroad? Look for the things which define your town, city or village and start making a big play on them in all of your marketing.

If you’re totally out of ideas, one of the best things you can do to attract staycation business is to simply run a competition to win a staycation package.

The simplest tactics often work wonders, and with everyone looking for a bargain getaway at the moment, you could give them far more than that and attract significant attention for your brand on social media while you’re at it.

Good luck with your staycation marketing. It’s a market you’ll immediately fall in love with, and it’s one which will become a fixture of your marketing campaigns going forward.

A TikTok guide for Hospitality Venues

It's not as hard to thrive on TikTok as you think, in fact, copying content is the norm. Here are our tips for getting started and getting ahead of the game.

A Hospitality Guide to Email Marketing

Email has the ability many channels don't: creating valuable, personal touches—at scale. Nail your strategy with our hospitality guide.

How Behavioural Marketing Could Transform Your Business

At Beambox, we refer to this type of marketing as ‘event-driven'. And we think it could transform your hospitality business.