It’s thought that there are over 300 million users on TripAdvisor. Collectively, they’ve posted more than 830 million reviews.

If you run a hotel or restaurant, your property will be on there. And it’ll have already garnered a few reviews - some good, some bad.

TripAdvisor is, understandably, both feared and relied upon by those operating in the hospitality industry. A review can mean the difference between someone booking a room or choosing the competition. It can sway people to an entirely different restaurant table if they don’t like what they read.

Thankfully, TripAdvisor can also be tamed and harnessed as a brilliant marketing and guest communication channel, and if you’re after advice on that front, simply head to the bottom of this post.

In the meantime, we’re going to have a bit of fun. TripAdvisor is, after all, a great source of entertainment, and there’s nothing like a tongue-in-cheek, light-hearted look at some of the worst reviews users have posted.

Here are six of the best bad TripAdvisor reviews we could find from across the globe.

Where: Strand Palace, London
When: December 2019

Clearly, no hotelier sets out to create a bad guest experience. In fact, they do everything they can to make it memorable enough to prompt another booking.

However, one unhappy couple appear to have used TripAdvisor to suggest that the Strand Palace have done exactly that, with a scathing review which points out the lack of raspberry jam, tiny superior double rooms and the lack of a cot (despite having pre-booked one).

“On arrival no cot despite pre booking, that’s not a disaster went back to reception and asked for one. Receptionist told me we don’t do cots. Really? I had to show her the confirmation email to prove they did indeed have cots in the hotel. She huffed and said she would try and find one. I suggested they go to Argos if not as our 18 month year old would not be sleeping on the floor … The cooked breakfast was tepid and mush, the continental stuff is ok, we got one t spoon between 4 of us but my favourite is the jam. It’s apricot or apricot and we were told that sometimes they stock raspberry but had run out this week. Whilst the location is great this hotel has one seriously down hill on all fronts.” 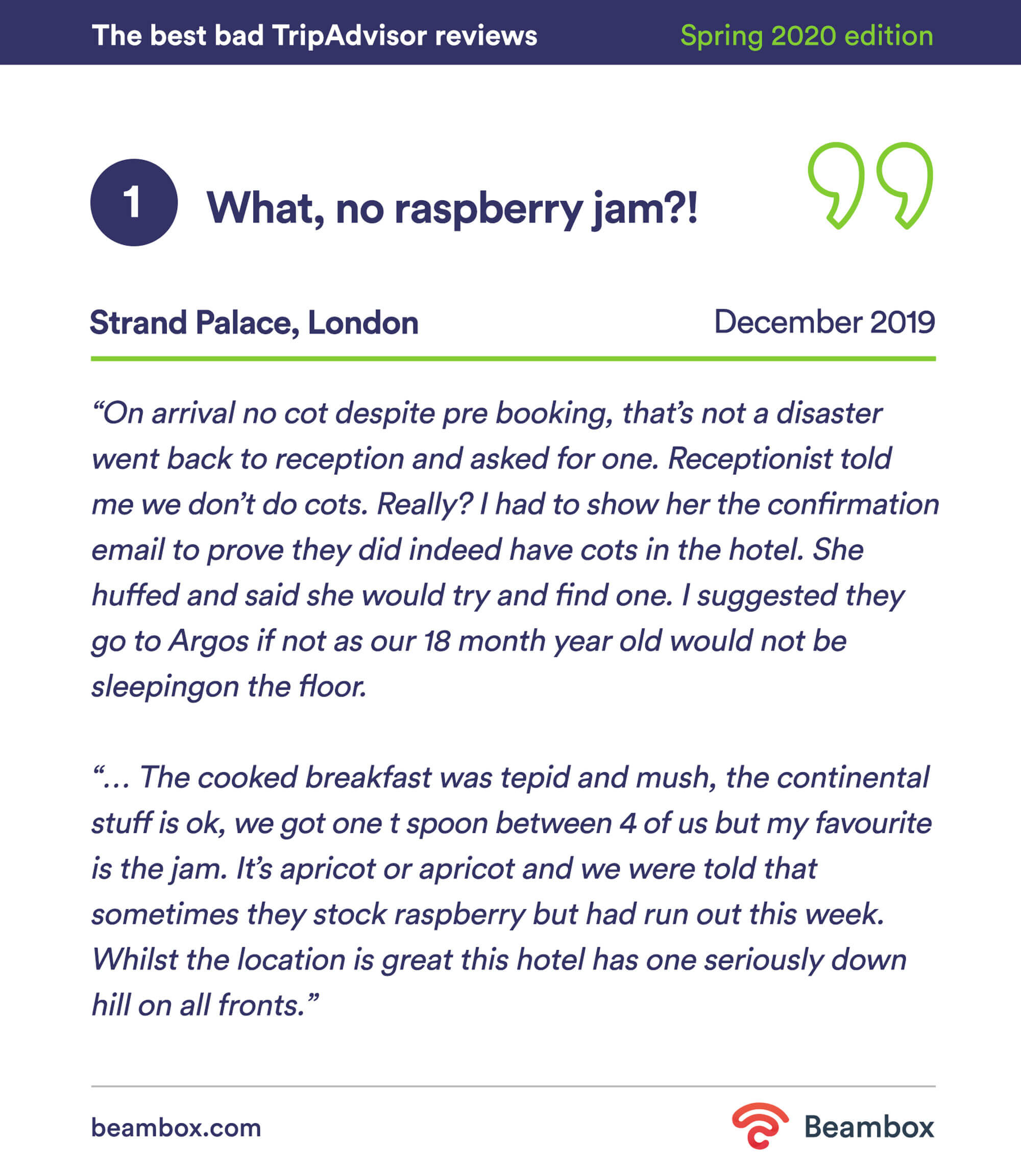 Where: Hyatt House, Dusseldorf
When: October 2018

It’s the classic fear of restaurateurs and hoteliers: the presence of rats. If a guest spots one, you’re as good as finished on TripAdvisor, right?

Well, not necessarily, The Hyatt House in Dusseldorf has actually garnered a majority of excellent reviews, but there’s one in the ‘terrible’ category which puts a whole new spin on the “we saw a rat!” complaint.

“Awful service with a rat / mouse running around the bar all night and no one doing nothing about it. Actually the waiters were joking about it and called their little friend “ Jerry”... definitely not what was expected of a hotel / bar of this level.” 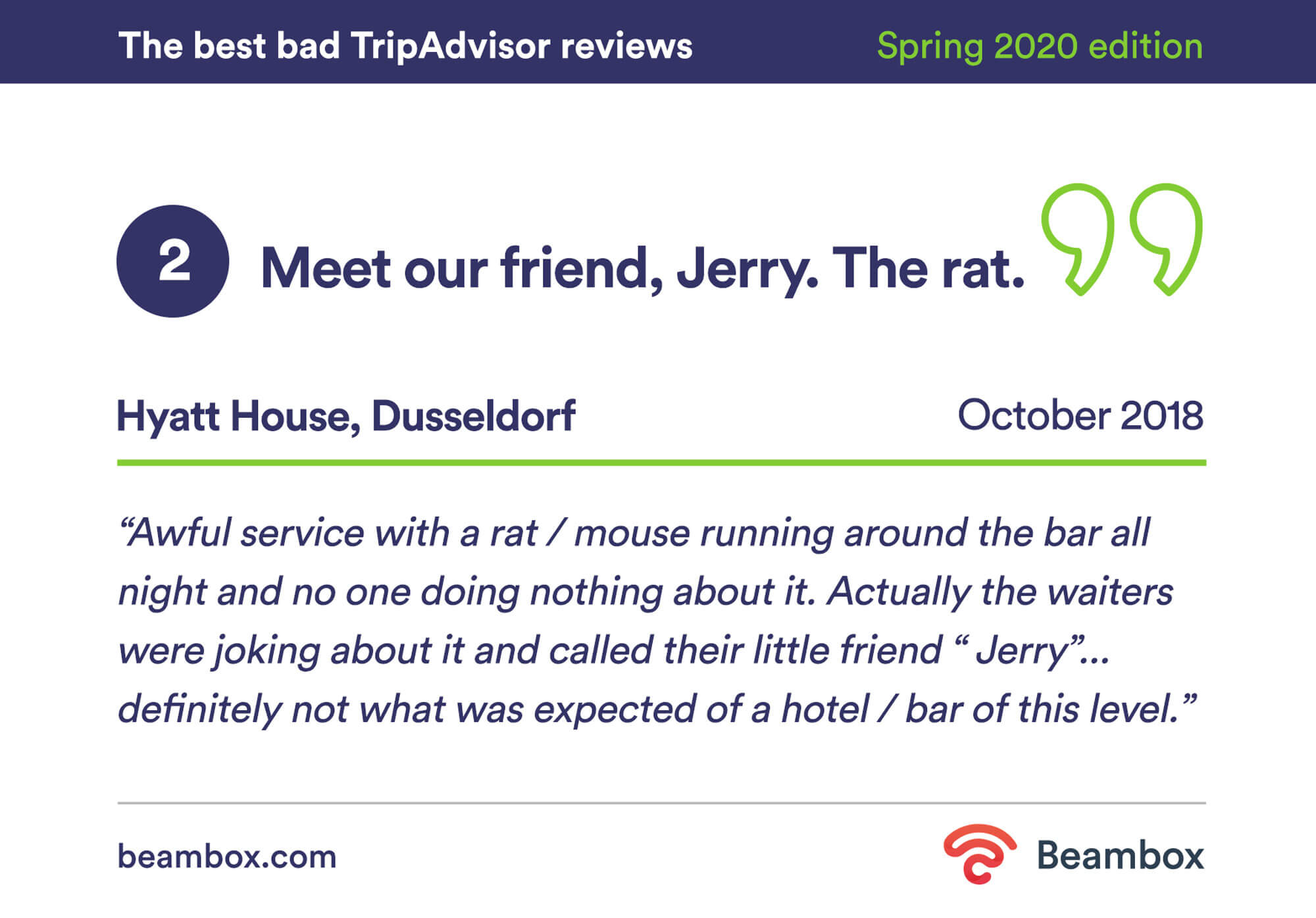 You know a bad review is going to be gold when it’s headed “Prisoner - Cell Block 310”.

This one doesn’t disappoint.

Interestingly, it’s the reviewer’s second stay, but that doesn’t stop him laying into the overly ‘cosy’ size of the room, noisy air-conditioning and a hotel bar which closed “once the late season OAP’s and their ‘grey pound’ had gone to bed”.

He was particularly displeased with the bathroom, though.

“To get into the bathroom you had to step around the door before strategically closing this behind you to access the WC or basin, it really was that small. The bathroom suite was old and looked like something that as Calvin Harris once said ‘was acceptable in the 80’s’.” 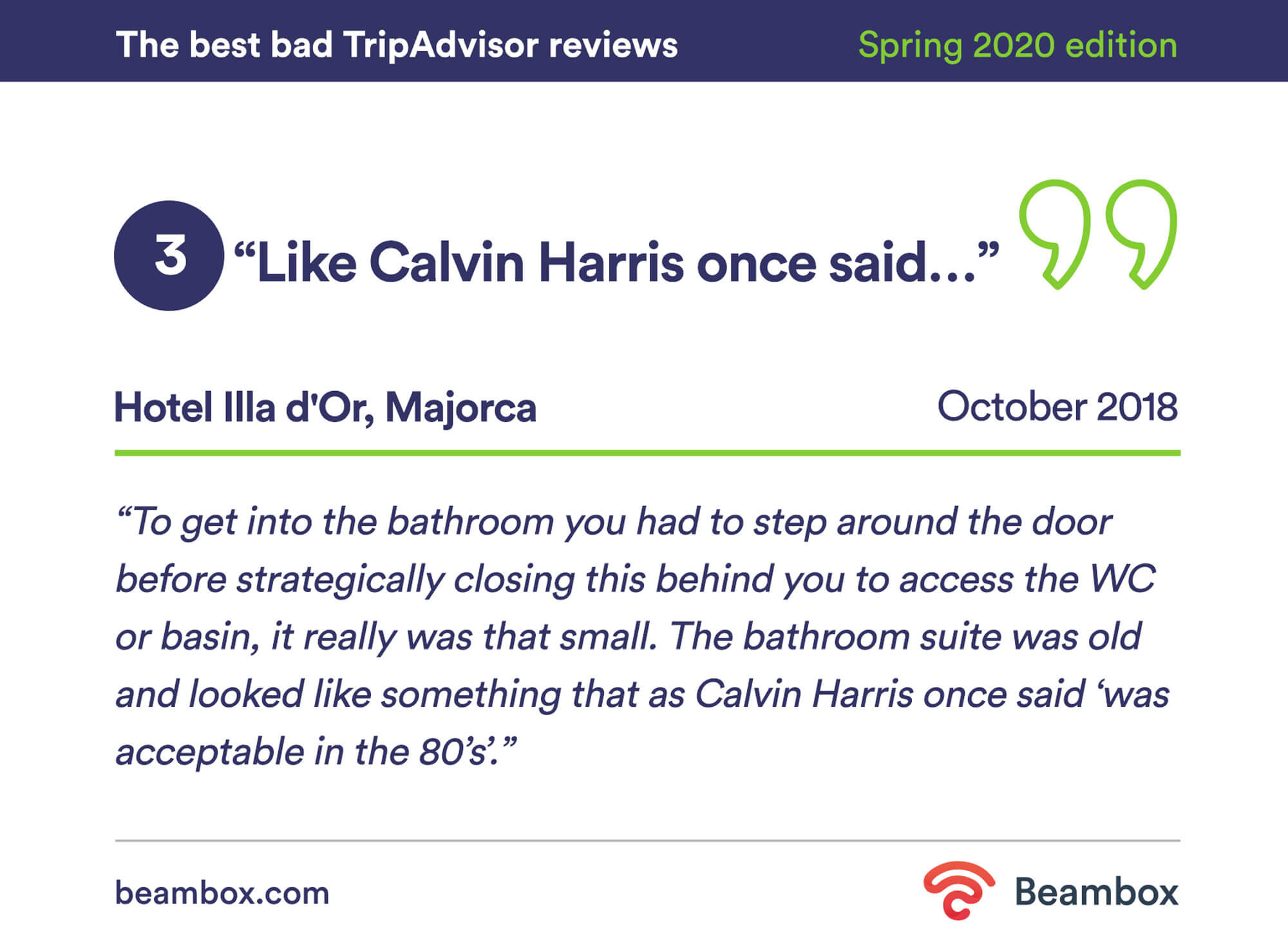 Where: The Peninsula, Chicago
When: March 2019

There’s no denying that the hospitality industry has made huge strides in catering for allergies and other dietary requirements. But, sometimes, it appears that lands them in rather hot water.

Over to Bob R, who titled his review of this Chicago hotel, “I WANT MEAT”.

“So I went to this hotel, it was recommended to me by a friend, and it was going well, nothing of a low quality and lovely staff, but then I ordered the room service burger with extra meat, but then I got the VEGAN OPTION instead of what I ordered and I HATE VEGAN FOOD!!!😡😡😡” 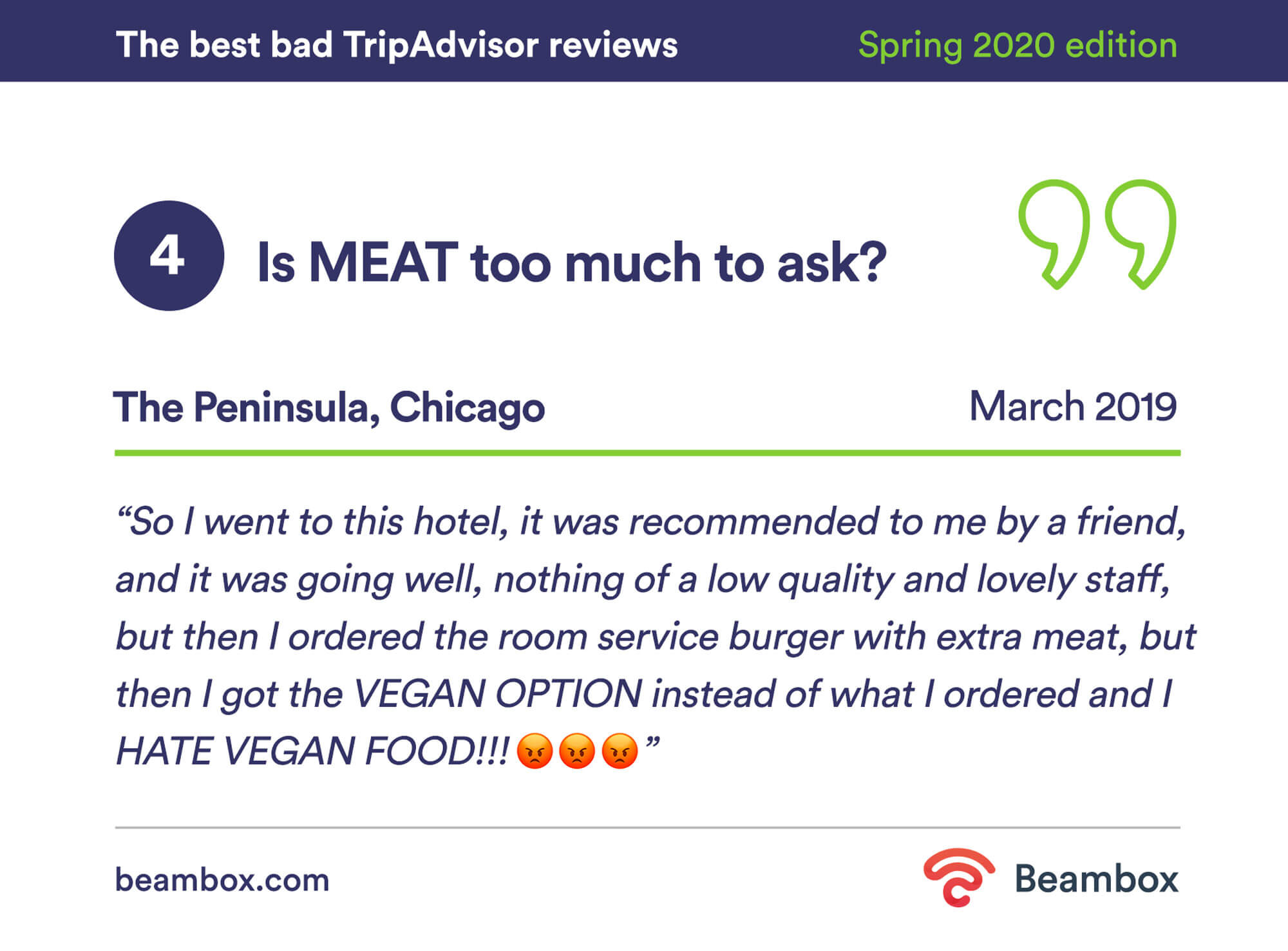 5. Enter the Peter Pan Kids Club at your own risk

Dubbed by one reviewer as the “Fawlty Towers in Vilamoura”, this Algarve hotel comes under a pretty vicious attack due to its alleged disregard for guest safety - even in the kid’s play area.

Multiple injuries apparently endured at the hotel subsequently resulted in something of a painful stay for this particular guest.

“I sustained a nasty cut to my hand from closing the Lethally dangerous gate at the entrance to the Peter Pan Kids Club and children's pool as i closed the gate on returning to the main pool area … Following that accident I approached a young lady at the main bar to ask for a plaster.....she nearly fainted and began to vomit! … Later that same day I was in our room (1108) and went to take a bottle of water from the mini bar. On closing the mini bar and standing back up I hit my head of the stupidly positioned ballistrade on the stairs...” 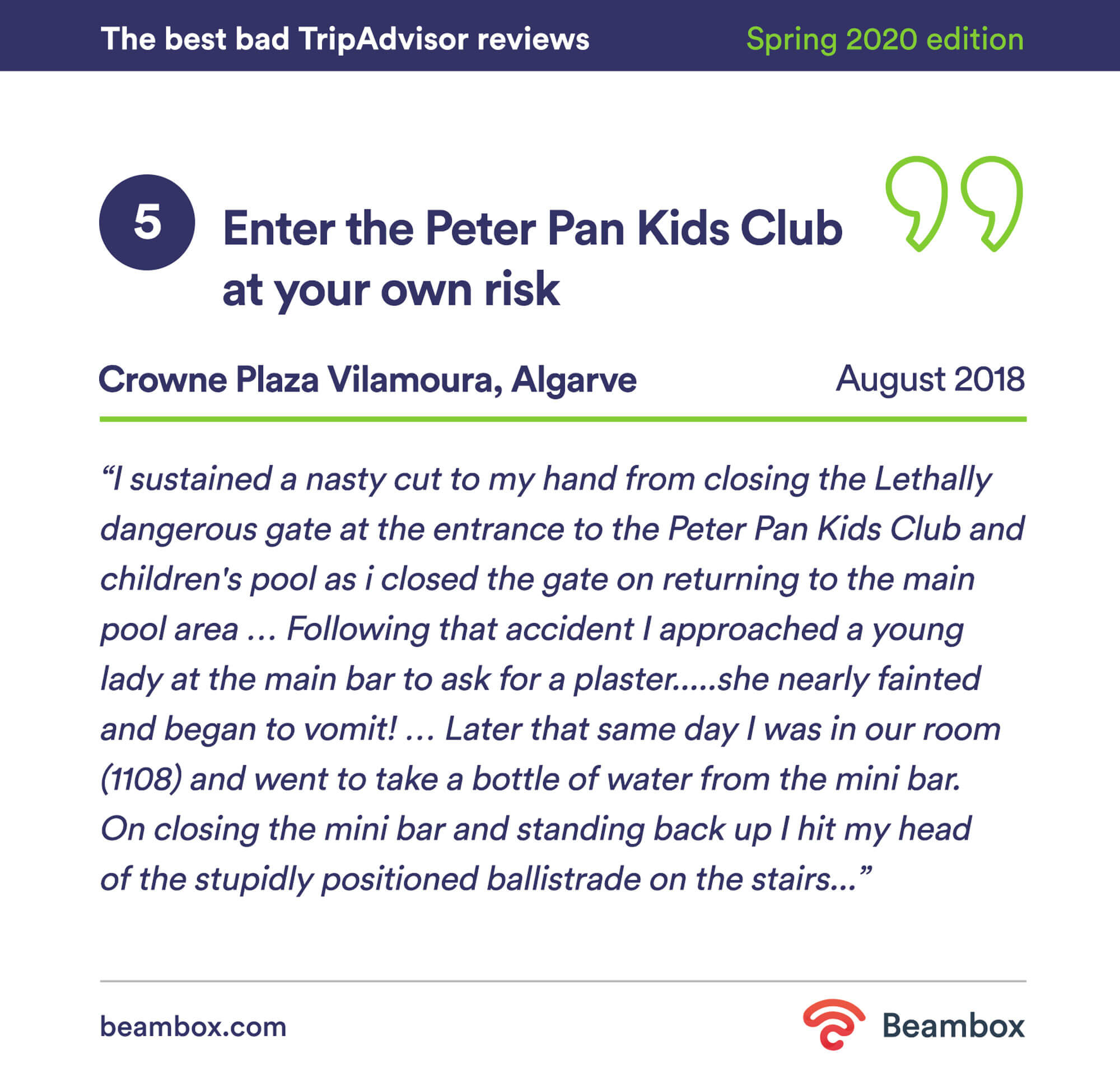 6. Wind can’t veer around corners, can it?

Where: The Johnstown Estate, Enfield, Ireland
When: November 2019

Things go wrong in hotels - that’s a fact of life. Sometimes, though, the problem is significant enough to cause a bit of a stink among guests -particularly if it’s the heating that’s at fault.

This was the case, apparently, in November 2019 when one couple staying at The Johnstown Estate were given what they believed to be a rather implausible reason for the “frozen” hotel.

“The receptionists were clearly instructed to deny there was an issue with the heating despite the obvious presence of maintenance men trying in vain to solve the problem. We were fobbed off with the explanation of blaming the wind direction. This would have entailed the wind blowing through not one but two automatic doors, turning right then veering a sharp left challenging even MET EIREANN with this logic.” 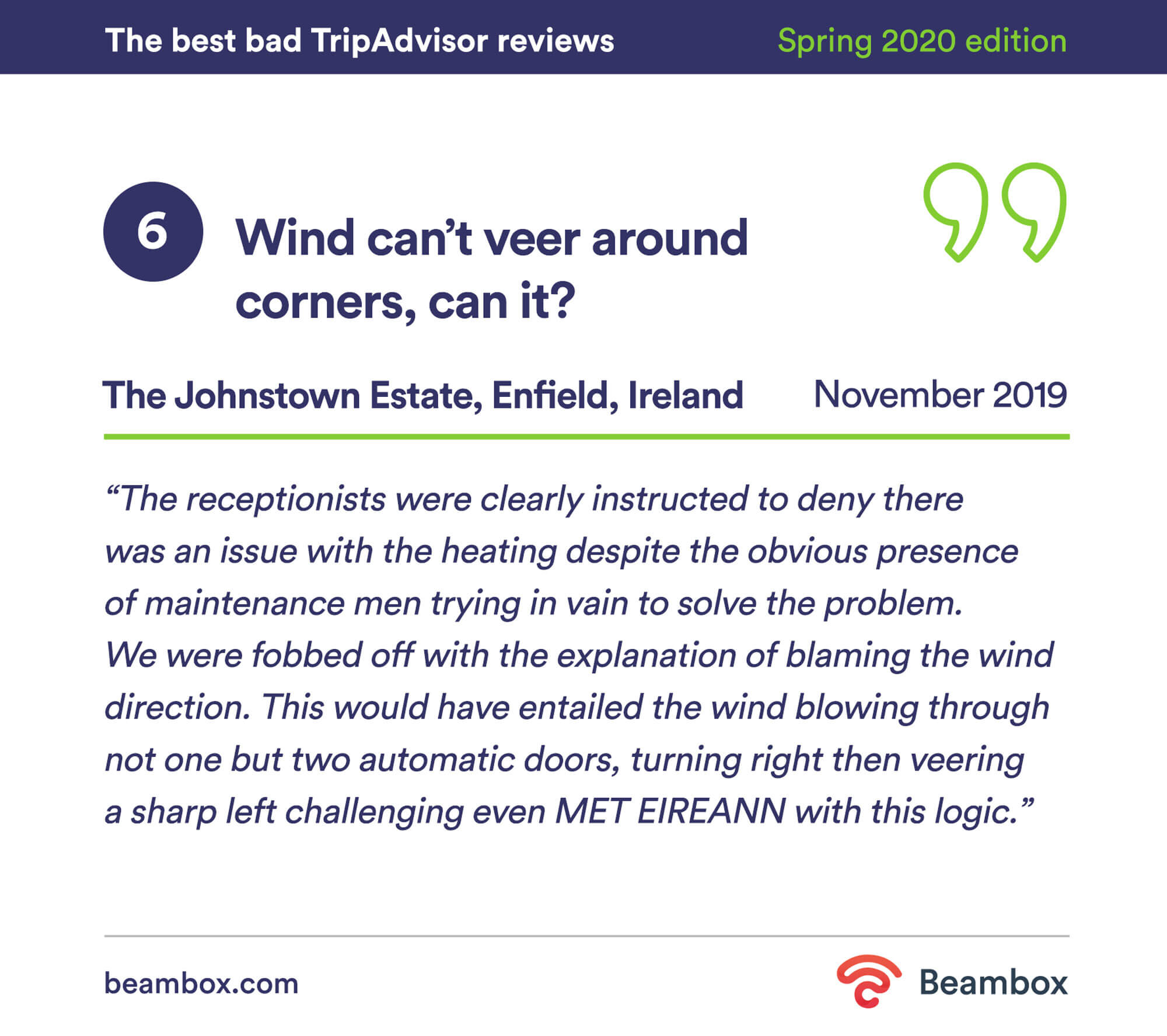 You’ll receive bad reviews on TripAdvisor for your venue - that’s part and parcel of running a hotel, restaurant or pretty much any other form of hospitality business.

It’s how you react to those bad reviews that will set you apart from the competition. Here’s some great resources for helping you take control of your TripAdvisor listings and use them to your advantage.

The Best Tripadvisor Management Responses We Found in 2019

No Silver Bullet: How to Encourage Great TripAdvisor Reviews