As of Spring 2018, it was estimated that there were over 600,000 restaurants operating in the United States.

That colossal figure demonstrates that the sector is anything but flagging, but if you work in the industry, you’ll be acutely aware of how competitive it is.

This stems across all types of restaurant, from traditional American diners to oriental cuisine.

We therefore thought it would be interesting to take a look at the most popular types of restaurant in the US. If you’re already operating in the industry, this may provide a sense of perspective about the level of competition you face.

Alternatively, if you’re interested in opening your own restaurant in the future, it might give you a steer on the type of establishment best suited (and most likely to draw in the biggest audience).

Most popular eateries by state

This brilliant piece of research by Thrillist provides a fascinating insight into the most popular types of restaurant cuisine by US state. The data is pretty reliable, too, because it was collated from American citizens who had opted into sharing their Google location history.

Pizza dominates the Midwest, big time, while sandwiches reign king in the Mid-Atlantic. Head further south, and Mexican makes an unsurprising appearance as king of that area, although it’s also notable as the most popular type of food in the west, too.

Perhaps more interesting are the cities that appear to be the ‘capitals’ of specific cuisine:

The sheer variety of cuisine available in the US demonstrates that the above really only offers a glimpse into the types of food available to diners.

The following map from The Huffington Post shows the most disproportionately cuisines in each state, and while there are some obvious entries, others will surprise: 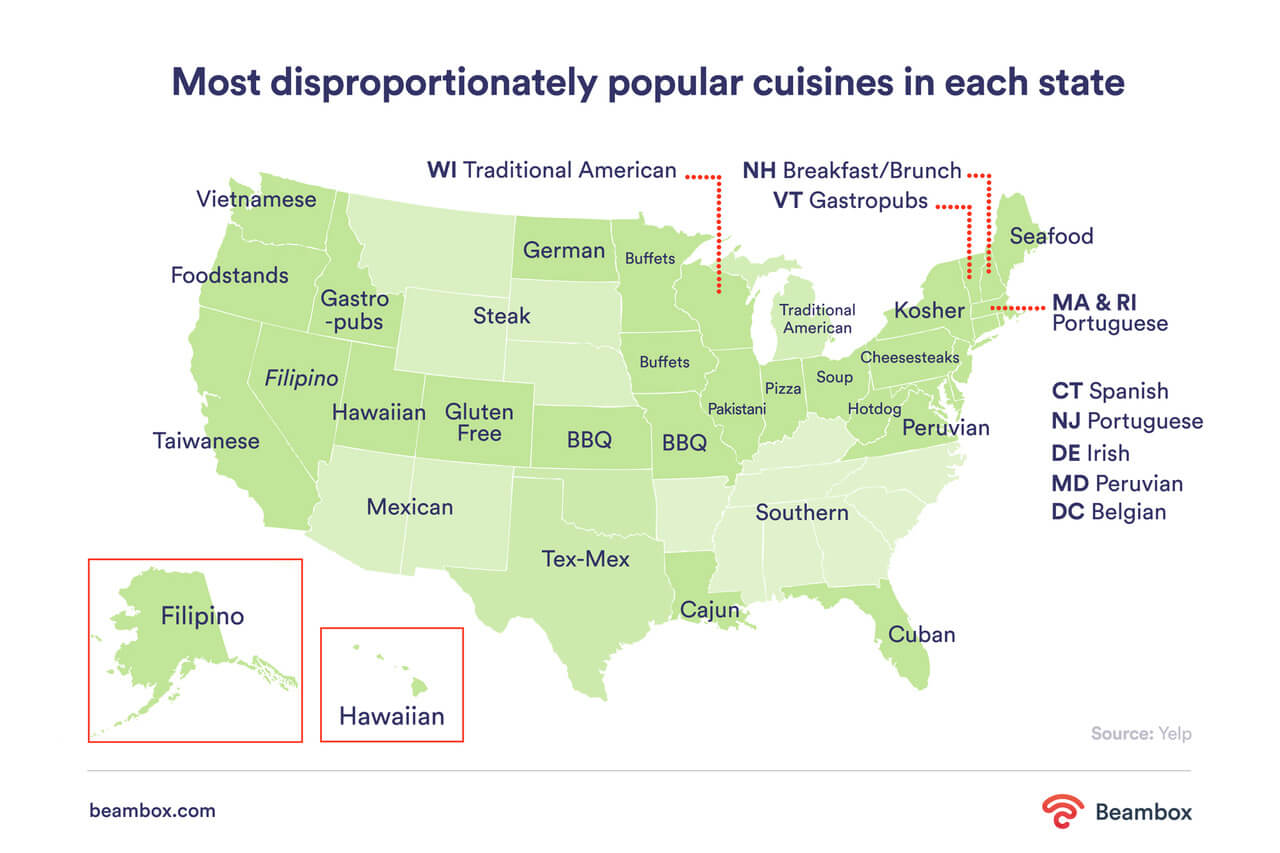 Gluten-free, gastropubs, Filipino and Peruvian all feature strongly in certain states, but that still only tells part of the story.

Although the data is a little long in the tooth now, the following figures by Statista demonstrate the huge role played by ethnic cuisine in the United States:

These are monthly figures, too, and are living proof that ethnic cuisine remains a dominant force in the American restaurant industry.

Which types of establishment make the most money?

Restaurants typically have relatively low profit margins (in fact, they’re estimated at around 2-6 percent), but there’s still plenty of money to be made if you get it right.

If you want to run a restaurant capable of delivering decent margins, this list of the five most profitable types of eatery may help with your business planning.

The next couple of years are likely to be key when it comes to dining trends in the US. The rise of fast casual, delivery and veganism is reshaping an already complex market.

In the meantime, if you’re about to enter the restaurant industry, where will you place your cards?

Based in the UK? What are the Most Popular Types of Restaurant in the UK?

15 Things Only Hospitality Staff Will Understand

There are some things that you'll only understand if you've worked in the industry...

What does it take to win one of the highest accolades in gastronomy? Spoiler alert, quite a lot! We can all dream, right?

How Christmas Affected the Hospitality Industry

How does Christmas impact food and drink trends, and what role does employee recognition play during the festive period? We dive into the latest stats.