How do WiFi Extenders Work?

What is a WiFi extender?

A WiFi extender is sometimes confused with WiFi boosters, but there’s a difference (we’ll get into that in a moment).

Extenders of this kind are used to repeat the signal of a wireless internet connection around a building. Put simply, it extends the coverage of a WiFi connection into areas where the source (usually, a broadband router) can’t reach.

Think of it like a bridge, which connects to your router and broadcasts the signal into areas where the original signal is too weak to penetrate. 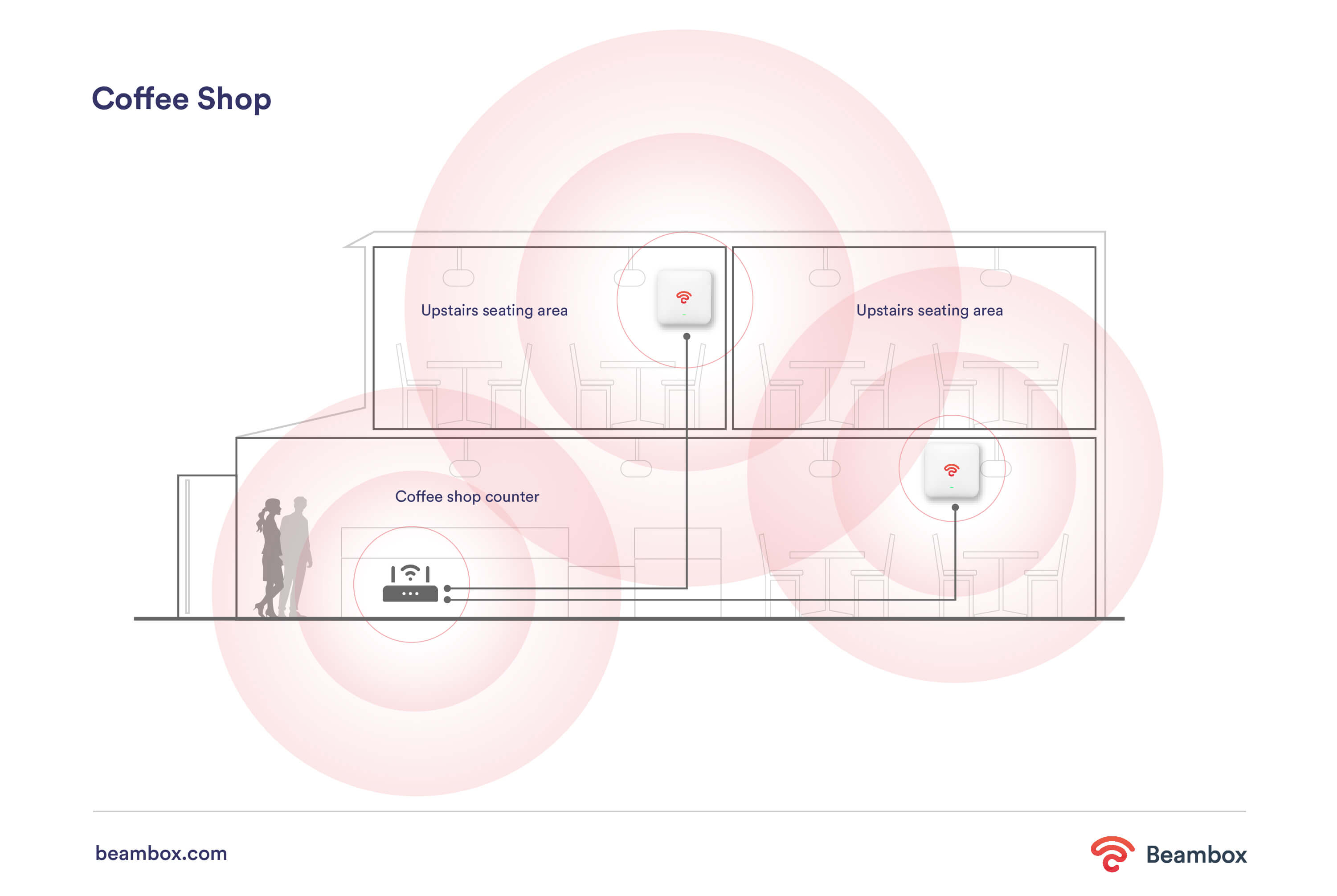 As previously noted, extending the WiFi signal in your business can call on a number of devices which all sound similar but which offer some important differences.

WiFi extenders offer the best bang for the buck when it comes to creating a consistent, fast connection throughout a large building. They do this by connecting by wire to the broadband router, essentially creating a second, boosted WiFi network.

Another option is wireless range extenders, which are standalone pieces of kit that sit between your broadband router and the location in which you need better WiFi. They do this without a wire, by instead grabbing the weak WiFi signal and re-broadcasting it. They’re imperfect due to the fact they rely on wireless channels and placement is crucial, but it is a slightly more cost-effective, non-disruptive solution for some scenarios.

WiFi boosters is actually a catch-all phrase, and refers to practically anything that can boost a WiFi signal. We therefore advise caution if you’re recommended a booster as the solution to your WiFi problems, because it could mean one of many solutions - not all of which will be fit for purpose in your establishment.

Wireless repeaters rank among the first generation of WiFi signal extenders, and, as the name implies, simply re-broadcast your original WiFi signal.

They work pretty well in smaller buildings, but they’re not without their challenges. It’s important to bear in mind the wireless repeaters simply re-broadcast the signal strength they receive in any given area, therefore if it’s a weak signal, that’s what you’ll be repeating.

Latency can also increase, which is the time it takes for data to get from one point to another and consequently defines the browsing or file transfer speed you experience.

One of the most obvious reasons you might need a WiFi extender is continual complaints from customers about slow or non-existent WiFi or questions as to whether or not you offer it at all.

If you do, there’s something wrong, and a WiFi extender might be the answer your customers need.

Here’s some other reasons you might need to invest in a WiFi extender.

How would a WiFi extender work in my business?

If you know, deep down, that you need to invest in a strong source of WiFi boosting, an extender is the way to go.

They work brilliantly, whether your building is small enough to simply cope with a range extender or full-blown extender network. The former normally works by simply plugging a device into an electrical outlet, while the latter is hardwired into your existing broadband router.

Related Article: What’s the difference between 2.4GHz and 5GHz WiFi?

That might sound like more trouble than it’s worth, but if you have a chat with an electrical contractor, they may reveal that the cabling work required isn’t as bad as you expect. What’s more, an investment in that kind of infrastructure now will set you up for many years to come and eradicate any common complaints you currently receive about the WiFi connectivity in your building.

Stairs, electrical appliances, thick walls and even corners in your building might be the root cause of the problem, therefore a site survey is definitely worth it before you spend any money.

So, you’ve identified that you have a need for better WiFi, but where should you begin with extenders?

It starts with a site survey, so make sure you book in a reputable company to have a good look at your existing setup and makeup of the building. Their advice should steer your purchase.

Alternatively, if you're a confident techie yourself, you can buy one extender and do the surveying yourself. Run range and speed tests (I recommend fast.com) and use the results to figure out how many you will need.

Thankfully, there are a huge number of extenders available on the market, but before investing, make sure you double check your router placement. Sometimes, going back to basics can highlight the real cause of the problem.

If you're looking to get more out of your WiFi and want to get started with WiFi marketing, Beambox may be a better option. Once plugged in, Beambox will launch a new high-range guest network with a branded WiFi portal. Capture guest emails, grow your social media pages and increase return-rate with a perfect WiFi experience.

Our plug & play access points require no setup and simply connect to your existing router or switch. Plus, you can use multiple together for extended range and device support.

Get Started with WiFi Marketing: Start your 30 Day Free Trial

Weekly tips, advice and guides on everything hospitality, straight to your inbox.

The Ultimate Hospitality Checklists for Reopening After COVID-19

Once we reach the 'new normal', reopening your hospitality business won't be as simple as unlocking the doors. Grab our handy checklists to make sure your venue is fully ready to welcome those new guests!

Why Destination Branding Matters More Than Ever in 2020

People need plenty of reasons to book hotel rooms and restaurant tables these days. Destination marketing could be your key to more guests who return more often.

Launch a Guest WiFi Login Across Your Aruba Networks

Using our new self-install guides, you can easily add your Beambox WiFi login to Aruba Central networks. Simply follow the step by step guide and get your guest WiFi up and running in minutes.