There are now over 2,600 across the world with at least one Michelin Star. They range from established venues to newcomers and cover an eclectic range of cuisines.

Included within the rating system of the famous Michelin Guide and originally devised by the Michelin brothers, André and Édouard, Michelin Stars have defined restaurant quality for nearly 100 years.

But how do you get one? And, more importantly, is it worth shooting for this hallmark of dining?

A short, potted history of the Michelin Star

The first edition of the Michelin Guide was printed in 1900 and handed out for free. But it wasn’t until 1926 when the Michelin Star was officially launched.

Back then, the two brothers hoped that by highlighting the fantastic places one could visit in a car, they’d inevitably sell more tyres.

Since then, Michelin Stars have been lusted over by restaurateurs and critics alike, and they’re defined by the mystique that surrounds the inspectors.

These people are shrouded in mystery, but they’re responsible for incredibly important decisions relating to the fate and public perception of many chefs and restaurants. This ‘cloak and dagger’ approach has led to plenty of criticism from those who believe the guide is biased towards French restaurants, but there’s no doubting the allure of those stars, regardless.

What you need to know before earning a Michelin star

It’s true that, technically, any restaurant can earn a Michelin Star. It is, after all, simply a mark against your restaurant, no matter where it is (within reason), what cuisine it provides or the type of customers you serve.

There are some things to bear in mind, though:

That last point is one of the most important. If you’re serious about getting yourself one of these elusive stars, you’ll need to put the effort in. It might take over your life for a period, and will inevitably result in lots of frustration, dead ends and questioning as to why you’re bothering.

However, if you like a challenge, and getting a Michelin Star is part of your business plan, keep reading.

What it takes to get one, two and three Michelin Stars 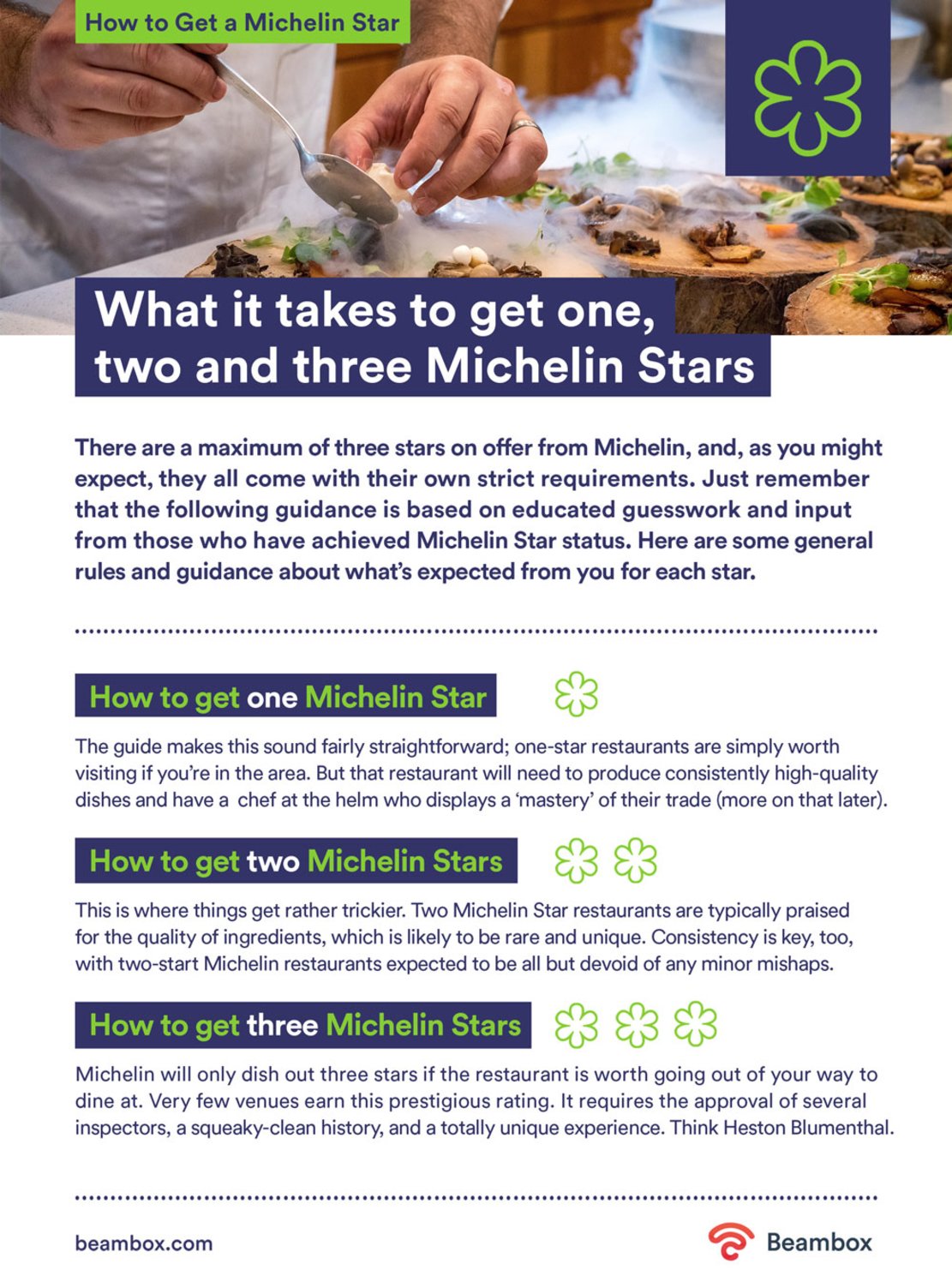 There are a maximum of three stars on offer from Michelin, and, as you might expect, they all come with their own strict requirements.

Just remember that the following guidance is based on educated guesswork and input from those who have achieved Michelin Star status.

Here are some general rules and guidance about what’s expected from you for each star.

How to get one Michelin Star. The guide makes this sound fairly straightforward; one-star restaurants are simply worth visiting if you’re in the area. But that restaurant will need to produce consistently high-quality dishes and have a chef at the helm who displays a ‘mastery’ of their trade (more on that later).

How to get two Michelin Stars. This is where things get rather trickier. Two Michelin Star restaurants are typically praised for the quality of ingredients, which is likely to be rare and unique. Consistency is key, too, with two-start Michelin restaurants expected to be all but devoid of any minor mishaps.

How to get three Michelin Stars. Michelin will only dish out three stars if the restaurant is worth going out of your way to dine at. Very few venues earn this prestigious rating. It requires the approval of several inspectors, a squeaky-clean history, and a totally unique experience. Think Heston Blumenthal.

As you might expect, these high standards have earned Michelin Stars a reputation for being an exclusive club into which only the most upper market restaurants can enter.

But that isn’t the case. Of course, many restaurants in the list sit resolutely within the fine dining bracket, but there are no rules for the type of cuisine or price of food where the guide is concerned.

Put it this way, in 2016, a Singapore food truck was handed a Michelin Star. If they can do it, so can you.

5 tips for gaining a Michelin Star

You’ll need skill, persistence and the odd bit of good luck in order to gain a Michelin Star.

Here’s how to ensure you’re doing everything you can to impress those fly-by-night inspectors.

1. Only use quality products and ingredients Everything starts with the ingredients and products you use, and Michelin inspectors know exactly what to look for. You can therefore do yourself an awful lot of good by working with conscientious suppliers who understand what it takes to grow, catch and create sustainable, quality ingredients.

This might mean paying more. It might even result in you having to travel to meet and work with suppliers. But if you’re serious about gaining a Michelin Star, this is where it all starts.

2. Ensure your chef becomes a master You might be the chef, or you may have employed a head chef if that’s not your profession. Whoever’s at the helm of your kitchen, they need to be at the absolute top of their game if they’re to have an influence on your Michelin-worthiness.

Becoming the ‘master’ of something is very much subjective, but when it comes to restaurants, there are two characteristics all top chefs share:

Your chef therefore not only needs to be an incredible cook - but they also need to be a savvy businessperson, too.

3. Ensure your personality runs through everything you do Restaurants that have Michelin Stars are all instantly engaging. Something about them immediately creates interest and intrigue, and that extends through everything they do from the menu to the ambiance.

You don’t need a chef who appears on TV at the weekend to get a star, but you do need a restaurant which has its own personality. This will make it unique and help you align it to your corporate identity.

Michelin inspectors are keenly aware of restaurants lacking personality. Even if the food is top-notch, the lack of any unique branding elements or experiences won’t impress them.

That personality may simply be a reflection of your own or of the history behind the cuisine you’re presenting. Whatever it is, it shouldn’t waver, which means your team, branding and public image needs to come along for the ride, too.

The inspectors will look for this. They won’t simply be impressed by high prices - there needs to be substance which delivers a meaningful experience to the customer.

It’s generally regarded that, as far as the Michelin Guide is concerned, a restaurant which delivers great value is one which leaves guests feeling like they’ve had a memorable experience.

Any restaurant can have a one-off incredible night of food and service. But the best do this every single day. They’re like a West End musical; every single performance is identically perfect, engaging and delightful, no matter how many times it has taken place previously.

The closer you get to a Michelin Star, the more you need to ensure you never, ever, drop your level of service, quality or experience.

I’ve earned a star… now what?

If you’re lucky - and hard working - enough to gain a Michelin Star… what happens next?

The good news is that you can expect plenty of attention from the media, Michelin themselves and your new fans. But there’s plenty of additional pressure, too.

Michelin Stars need to be maintained and will regularly be assessed. This can take its toll on restaurant owners, but the key is to simply stick with the strategies you’ve employed to this point and avoid putting too much pressure on yourself.

After all, it’s your hard work that’s got you that first star. Keep it up, and another one might arrive one day in the future. If you’re enjoying the hard work that comes with being part of the Michelin Star club, it shouldn’t become a burden.