The Most Important Social Media KPIs in Hospitality

If you operate in the hospitality industry, that should give you plenty of impetus to ensure that your social media marketing strategy is on point and delivering results.

This all comes down to key performance indicators (KPIs). They’re not just for staff appraisals or board meetings; KPIs will ensure your social media marketing is making a tangible difference to your bottom line.

Should I bother with social media?

Spending on social advertising this year is expected to increase to $43 billion in the United States alone. And it doesn’t cost as much as you might think, either. In fact, social ad pricing has been relatively stable since 2018, and the average price paid for an ad to be seen actually fell by 3% in 2019.

Great social media marketing can benefit your business considerably. Now, more than ever, it’s important to keep your brand’s tone of voice both vocal and highly visible, and there’s nowhere better to do that than on social media.

The challenge is that it’s such a vast platform - and there are so many platforms on which you can promote your brand.

So, you should bother with social media - absolutely - but not without a solid KPI base from which to work.

If truth be told, these KPIs don’t change much, year-on-year. And that’s a good thing, because it means you don’t have to continually switch them up to make sense of your social media efforts.

Here’s a quick reference guide to the 4 most important social media KPIs for hospitality. 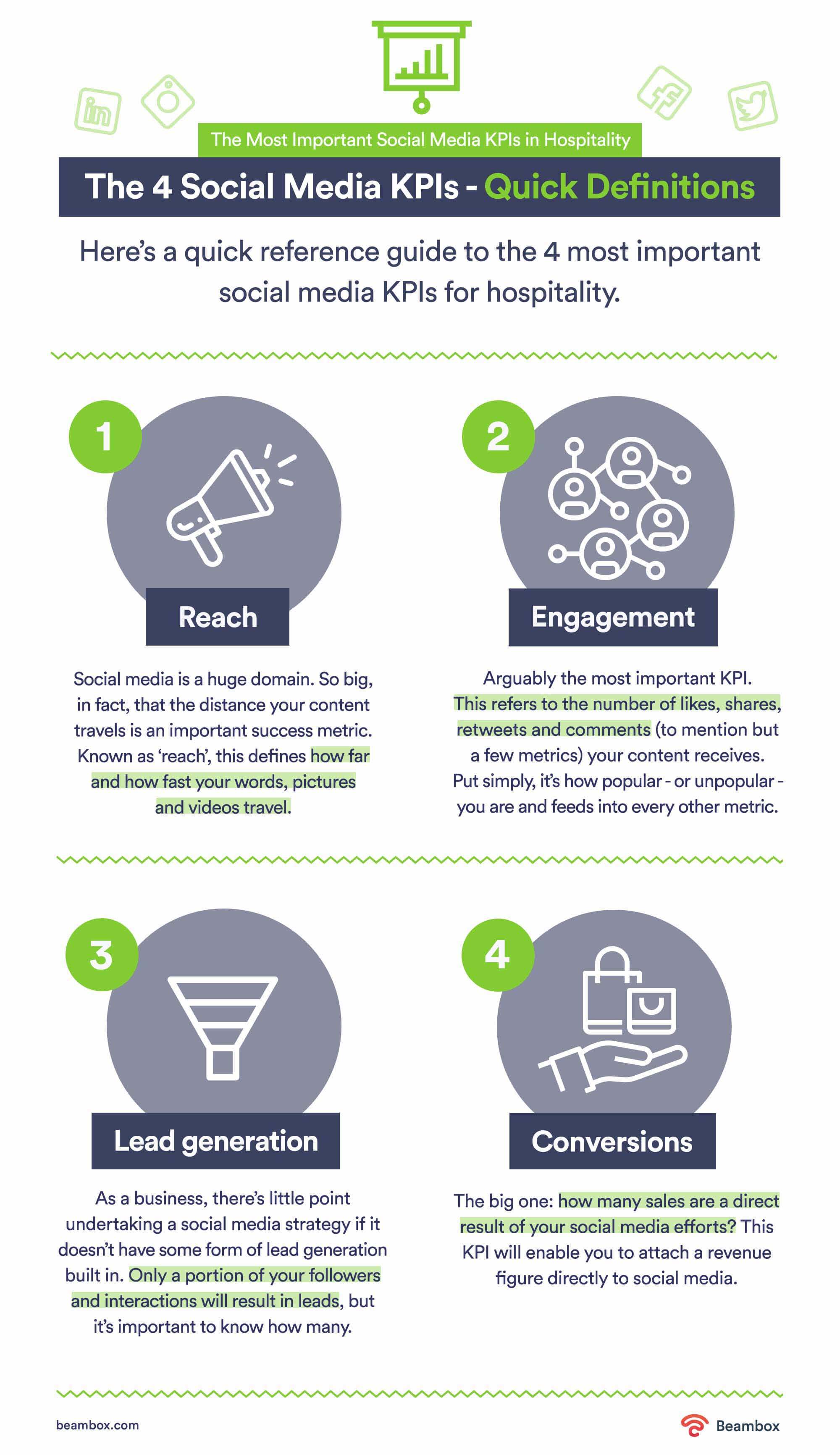 Social media is a huge domain. So big, in fact, that the distance your content travels is an important success metric. Known as ‘reach’, this defines how far and how fast your words, pictures and videos travel.

Arguably the most important KPI. This refers to the number of likes, shares, retweets and comments (to mention but a few metrics) your content receives. Put simply, it’s how popular - or unpopular - you are and feeds every other metric in this list.

As a business, there’s little point undertaking a social media strategy if it doesn’t have some form of lead generation built in. Only a portion of your followers and interactions will result in leads, but it’s important to know how many.

The big one: how many sales are a direct result of your social media efforts? This KPI will enable you to attach a revenue figure directly to social media.

Some people might tell you that reach is an old-school metric that can largely be disregarded today.

The reach you achieve with your social media marketing campaigns will remain relevant for as long as social media is a ‘thing’. And the reason is simple: reach confirms how far your social posts are travelling and will greatly impact the number of people you attract to your brand.

Low reach isn’t necessarily a bad thing if you’re getting above average levels of engagement, but if that isn’t the case, it might indicate that you’re simply not putting enough work into social media. 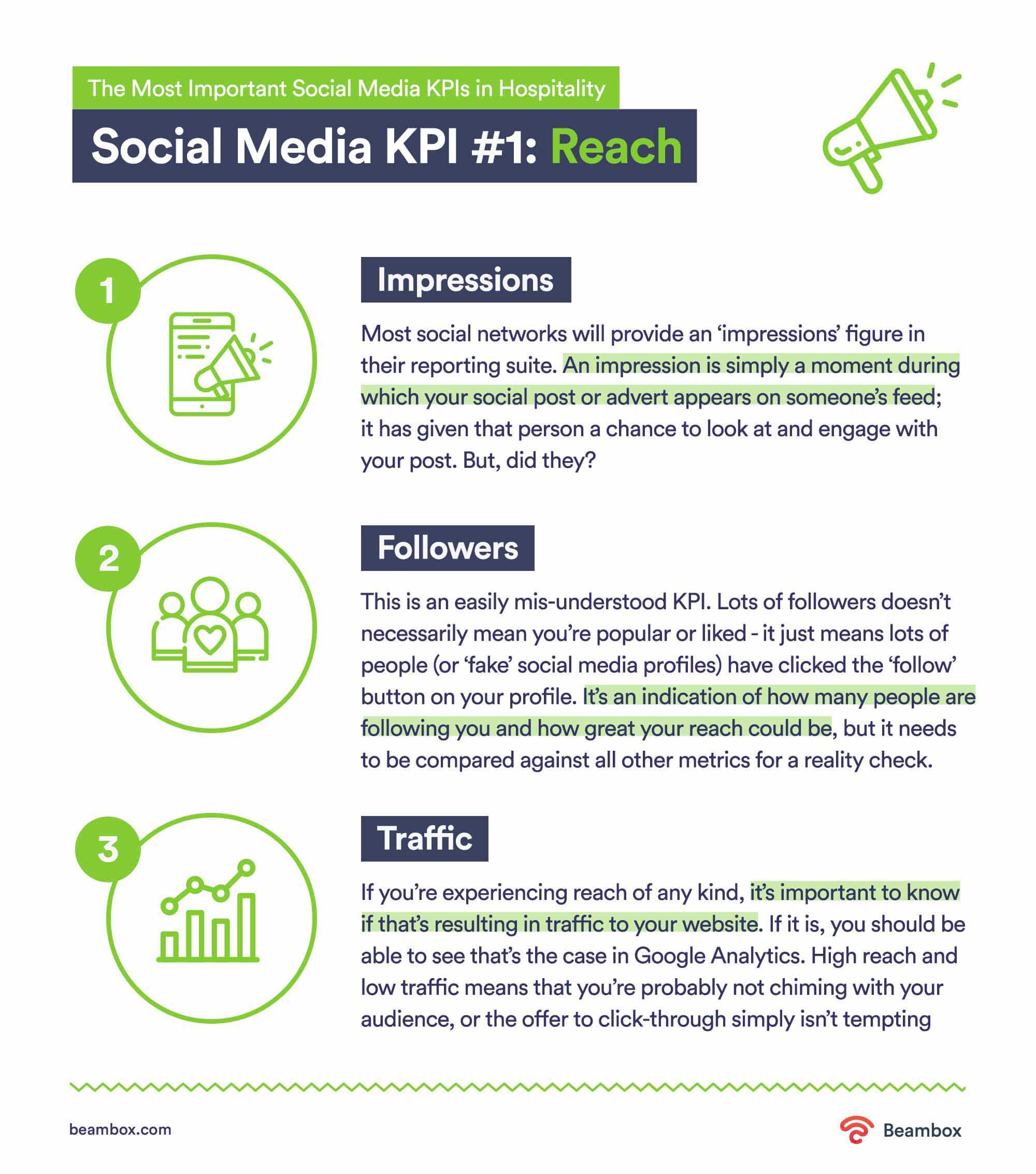 This is the KPI to which all others relate. If you don’t get decent enough levels of engagement on social, you won’t reach a big audience, your ability to generate leads will decrease and, consequently, you’ll probably see zero conversions as a result of your efforts.

Engagement can tell you so much about your marketing campaigns. For instance, if it’s really high but you don’t seem to be getting any leads, your messaging probably isn’t right. Similarly, if you’re enjoying decent reach but a low engagement rate, whatever you’re doing isn’t resonating properly with your audience.

Most experienced marketers will agree that a small, tightly defined and highly engaged audience is much better than a massive audience that simply doesn’t do much with your posts. 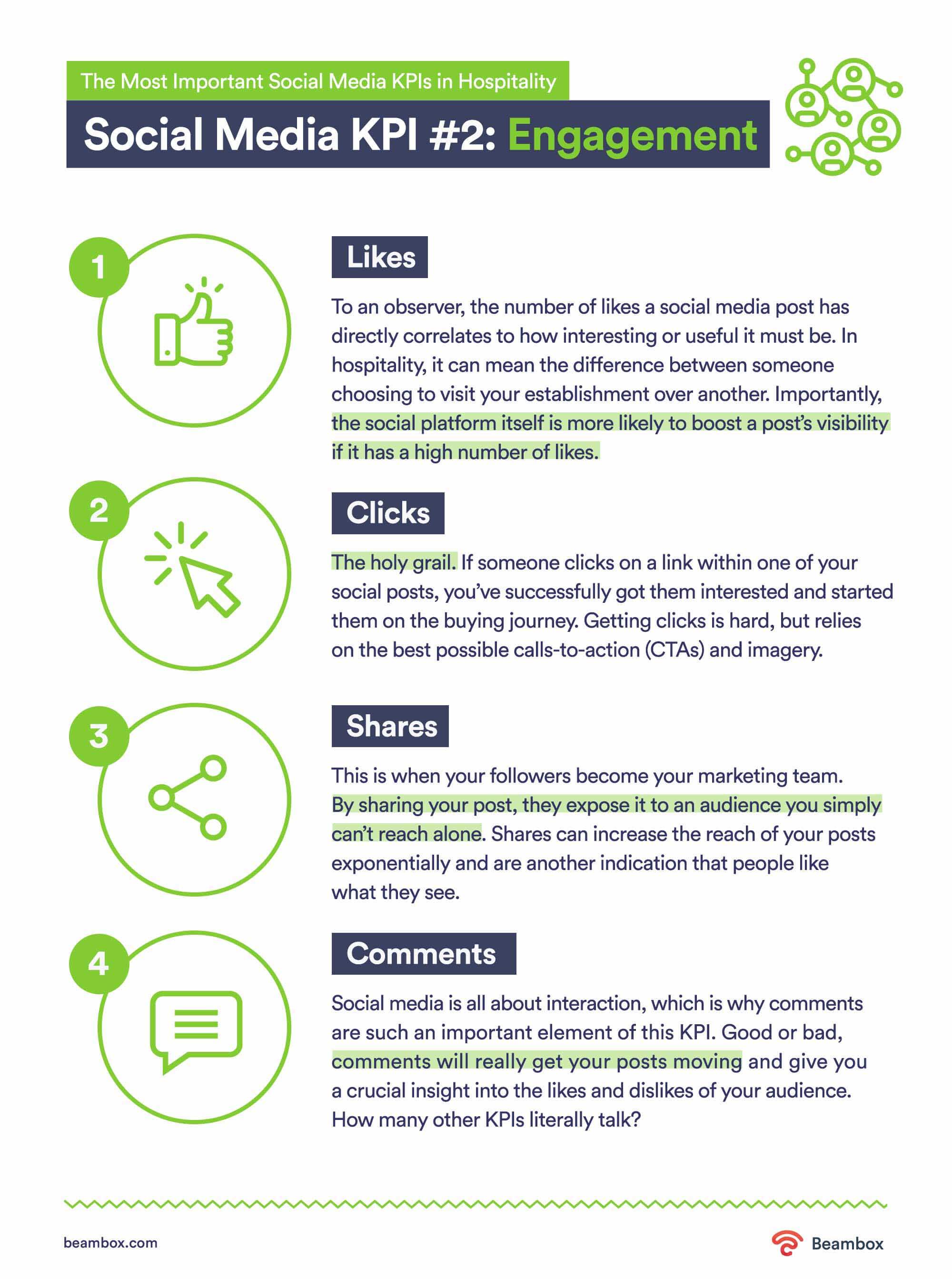 If you’re getting great reach and engagement - congratulations; you’ve got what should be a profitable lead generating machine.

A huge follower base, loads of engagement and massive reach is, actually, pretty inconsequential if you get any leads. After all, if your business isn’t making money, that social media prowess isn’t going to be of much use.

This is still the case if you see social media as nothing more than the voice of your company. That voice - just like the voice of your marketing department - should be capable of generating well qualified leads.

How to measure lead generation from social media

This isn’t an easy task, and it’s far from 100% accurate (like most forms of lead generation measurement), but there are some tried-and-tested methods you can use to gain the best bird’s eye view of what’s going on.

Analytics tools like Google Analytics usually attribute a conversion to the last interaction the user had. So, if that wasn’t social media, it won’t get any credit as a lead.

The good news is that Google is aware of this frustrating attribution issue, and has responded by offering a number of reports aimed squarely at determining whether or not social media is resulting in proper leads for your business.

You can find the report in Google Analytics by following this path:

If you’ve done a decent job on social media, those leads you receive will convert. Not all of them, admittedly, but a good proportion of them should.

Measuring conversions is often an internal task due to the many ways in which businesses attribute the word ‘success’ to a closed sale. In hospitality, however, it’s markedly easier thanks to the simple definition of a sale (in most cases).

Just remember to attribute the conversions below correctly to your social media leads (see note on Google Analytics, above).

When businesses claim, “social media doesn’t work for us”, they’re not trying hard enough. It’s a harsh, simple truth which becomes clear when you consider the availability of the KPIs above.

As noted from the outset, the likelihood of these KPIs changing is rather low, so throw yourself wholeheartedly into creating yours safe in the knowledge they’ll serve you well for a long time to come.

Related: How to Create Great In-House Video Marketing for Your Restaurant

Related: How Consumers Search for Restaurants