It’s thought that 94% of consumers would avoid a business if they find a bad review relating to it. What’s more, 53% of them expect businesses to respond to negative reviews within a week.

That’s a lot of pressure on hospitality business owners to build and maintain a positive online persona for their venue. But the power of an online review is always matched - or beaten - by the response from the business in question.

Get it wrong (or ignore the task entirely), and it’ll only add to your problems. Get it right, and you’ll reveal to the whole world that you’re genuinely focused on the service you provide. It shows that you care. The best examples of responses to poor online reviews Like anything in business, it’s a great idea to learn from the best when it comes to responding to negative online reviews.

We’ve trawled the web to find some of the best examples of responses to negative online reviews. Some are super-smart, while others are too funny, intelligent and witty to ignore.

Sometimes, you’re hit with a barrage of complaints from a single reviewer. In this example, despite some highlights, the overall experience has prompted the reviewer to vow that they’ll ‘never again’ return to the restaurant.

The response addresses each concern and reveals how the restaurant could have helped if they’d been made aware of the issues on the day (a common frustration for restaurateurs dealing with complaints after the event).

2. Taking it on the chin

Some negative reviews are entirely justified and delivered in a reasonable, non-abrasive fashion. But they’re often the hardest to deal with - particularly if you know, deep down, that they’ve made a very valid point about your service.

In such instances, and like anything in business, it’s best to simply be honest, put your hands up and admit that you need to do better. Just make sure you explain how you’re going to do that. 3. When you know something doesn’t ring true

There are, unfortunately, instances where negative reviews don’t tell the whole story. You’ll receive a one-sided opinion from the customer regarding an issue which has in all likelihood been blown entirely out of proportion.

Worse still, it’s probably entirely inaccurate. So, if you spot instances of reviews that appear to be wholly unfair, make sure you do your research and report back with your findings. Like this (ok, it might be a bit over the top, but you get the idea).

A conflicting version of the truth can be dealt with, as you’ve seen above, but what about when you’re dealt a negative review which is just a complete lie?

This is, thankfully, a fairly rare thing, but there are some people out there who will stop at nothing to paint your business in the worst possible light online for reasons only known to them. Check out this fabricated negative review and the brilliant, simple response from the owner. 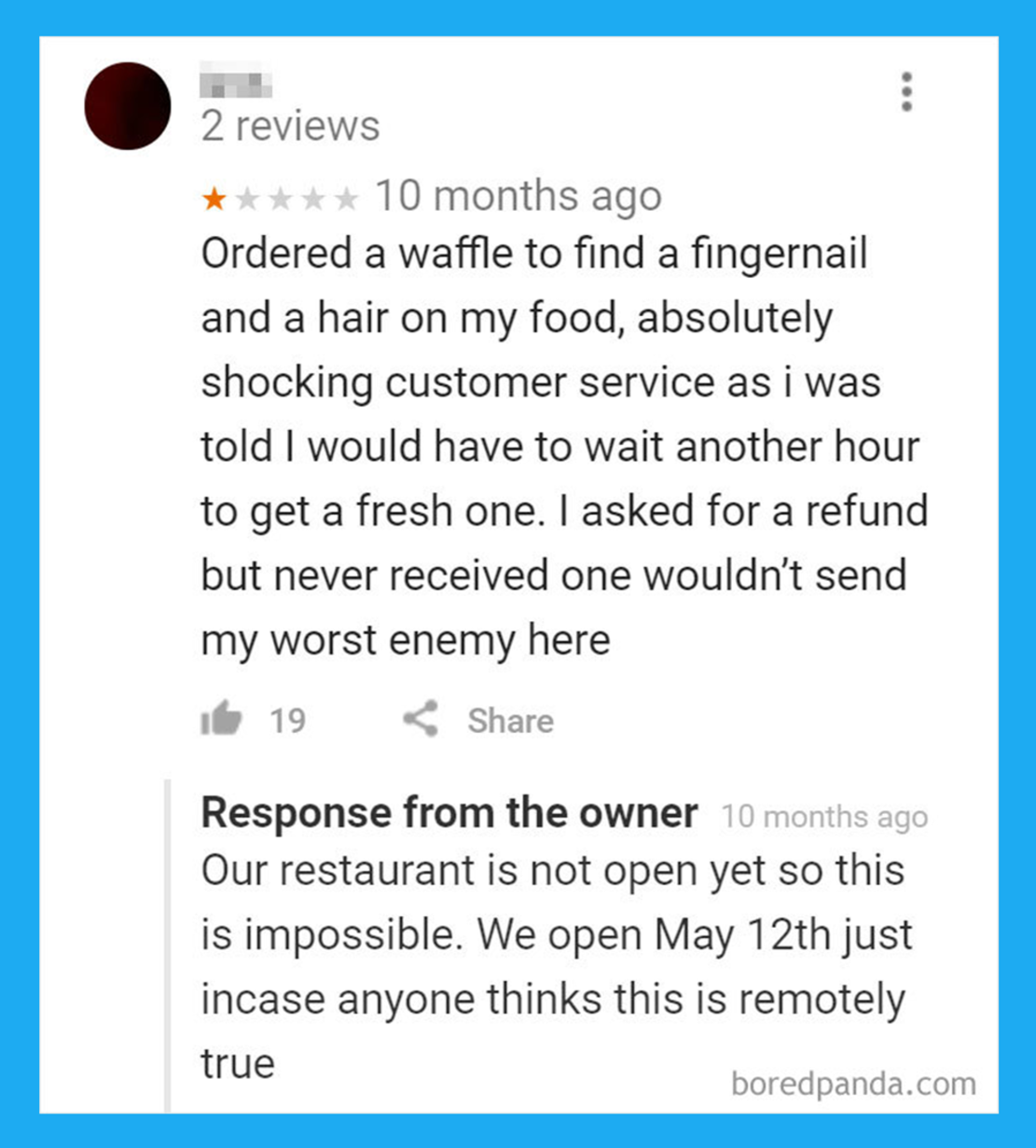 Oh, and here’s another example of an out-and-out lie disguised as a negative review. Who knows, perhaps the diner simply left the review against the wrong restaurant… 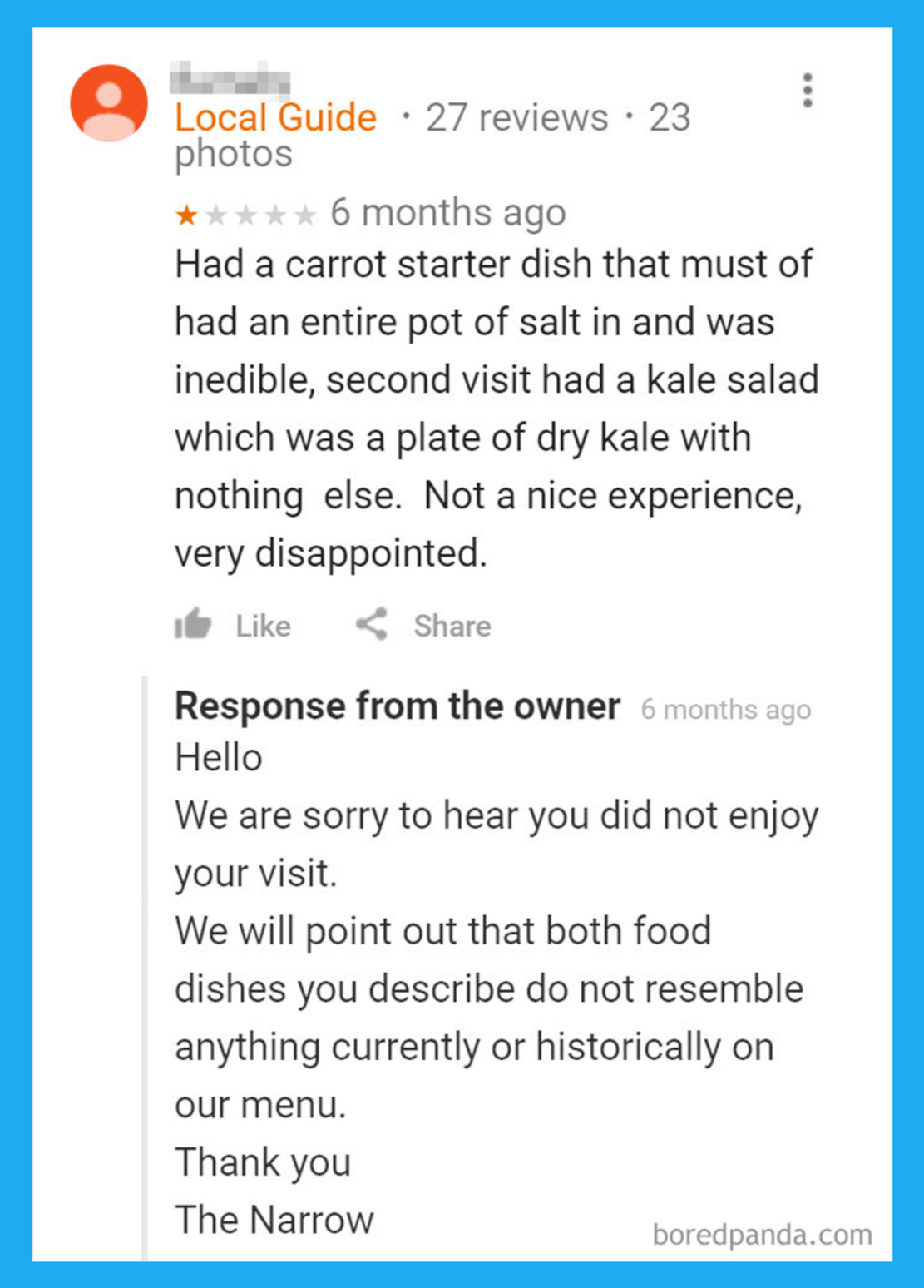 So, you’ve received a review from someone and you’re certain that whatever it is they’re either talking about or showing via a photo doesn’t have anything to do with your venue.

You’re probably right. Trust your gut; go hunting for their other reviews. Chances are, you’ll spot a pattern, or something even more revealing about the way they conduct their online review process. That’s exactly what this restaurant owner found when they dug a little deeper. 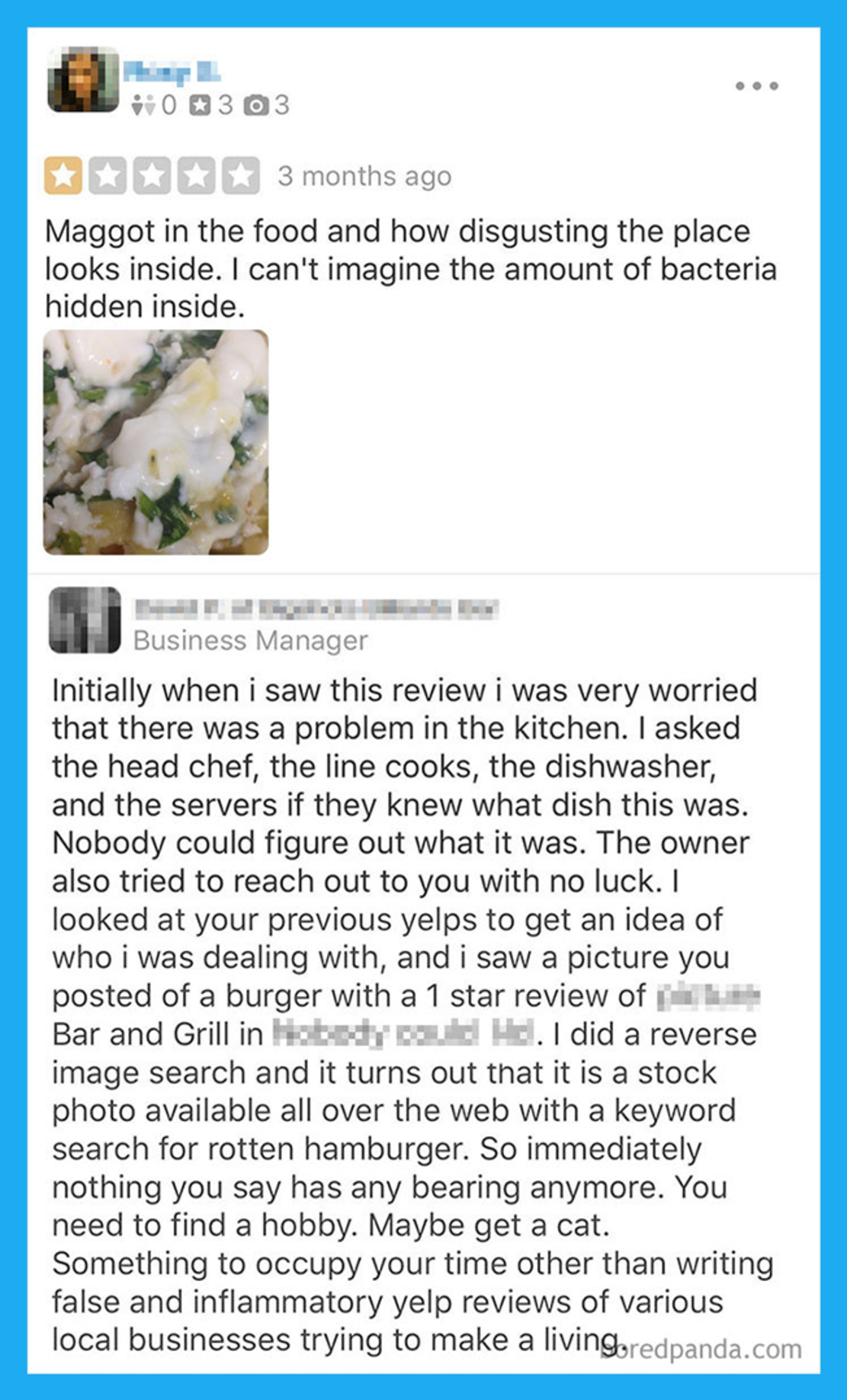 It might be tempting to look past the reviews you receive which only contain a single negative word.

But in doing so, you might be missing out on the perfect opportunity to highlight someone who is attempting to fool your potential customers with inaccurate information. Check out Raymond’s manager response below. 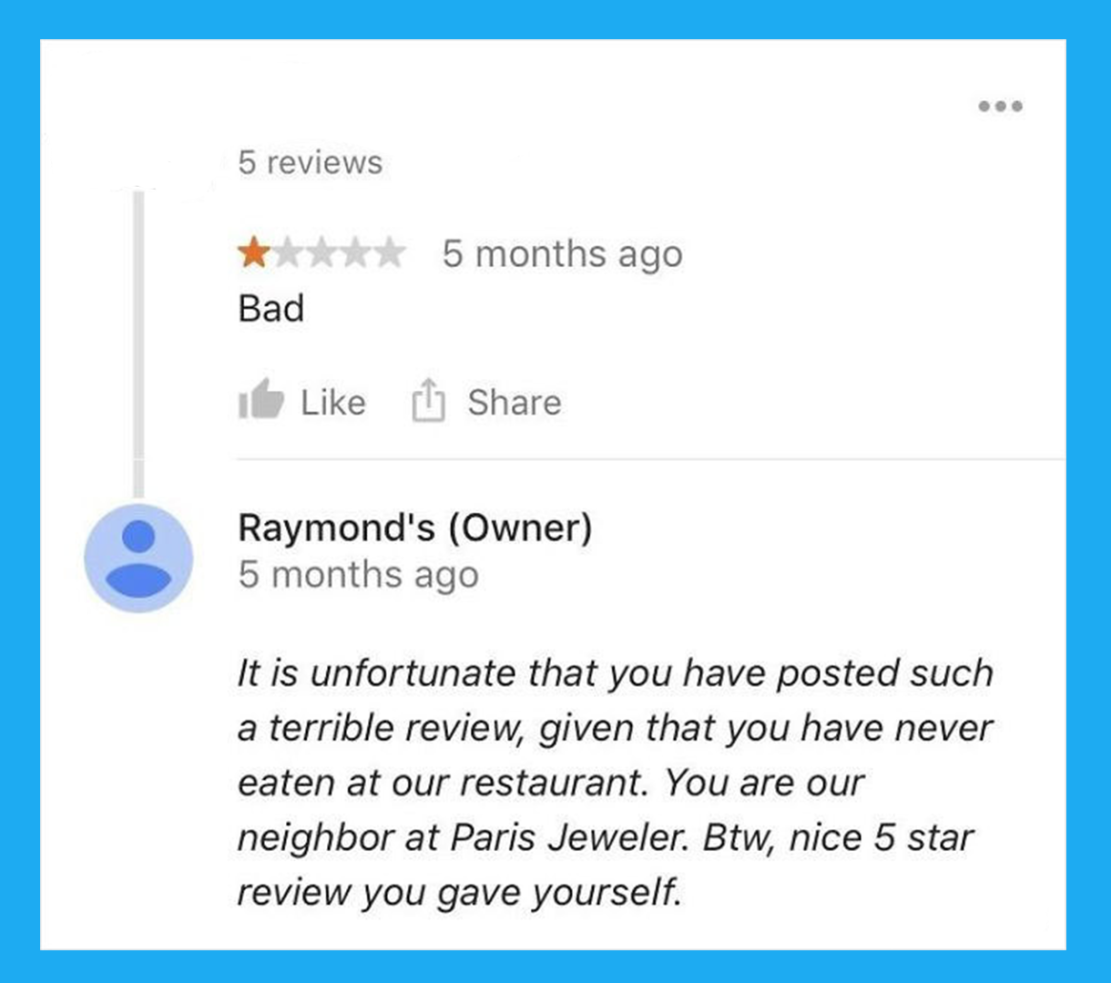 8. Demonstrating what you’ve done so far

Sometimes, you’ll find that no matter how hard you try to rectify a situation or address a customer’s problem, you simply cannot get a response from them.

That happened at this particular hotel, and while the response is written by someone whose first language possibly isn’t English, they have done a marvellous job of revealing the lengths they’ve already gone to while attempting to make things right. 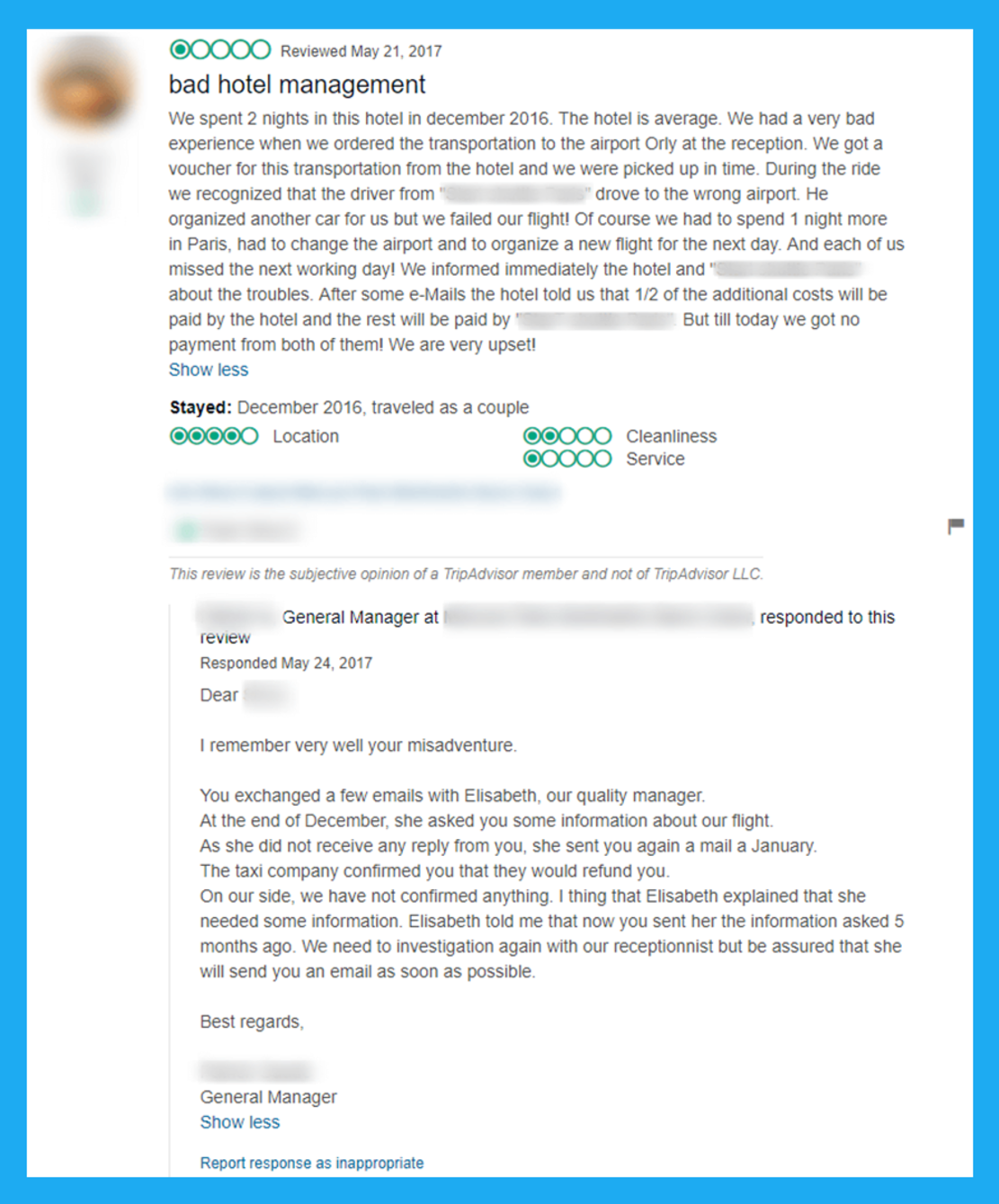 9. Revealing when the customer isn’t right

If you’ve worked in hospitality for any amount of time, you’ll be acutely aware that customer behaviour is, sometimes, completely unfathomable.

That kind of thing stays with you, which is why, if you subsequently receive a negative review from such a guest, you can get away with a far more tongue-in-cheek, witty response. Like this one. 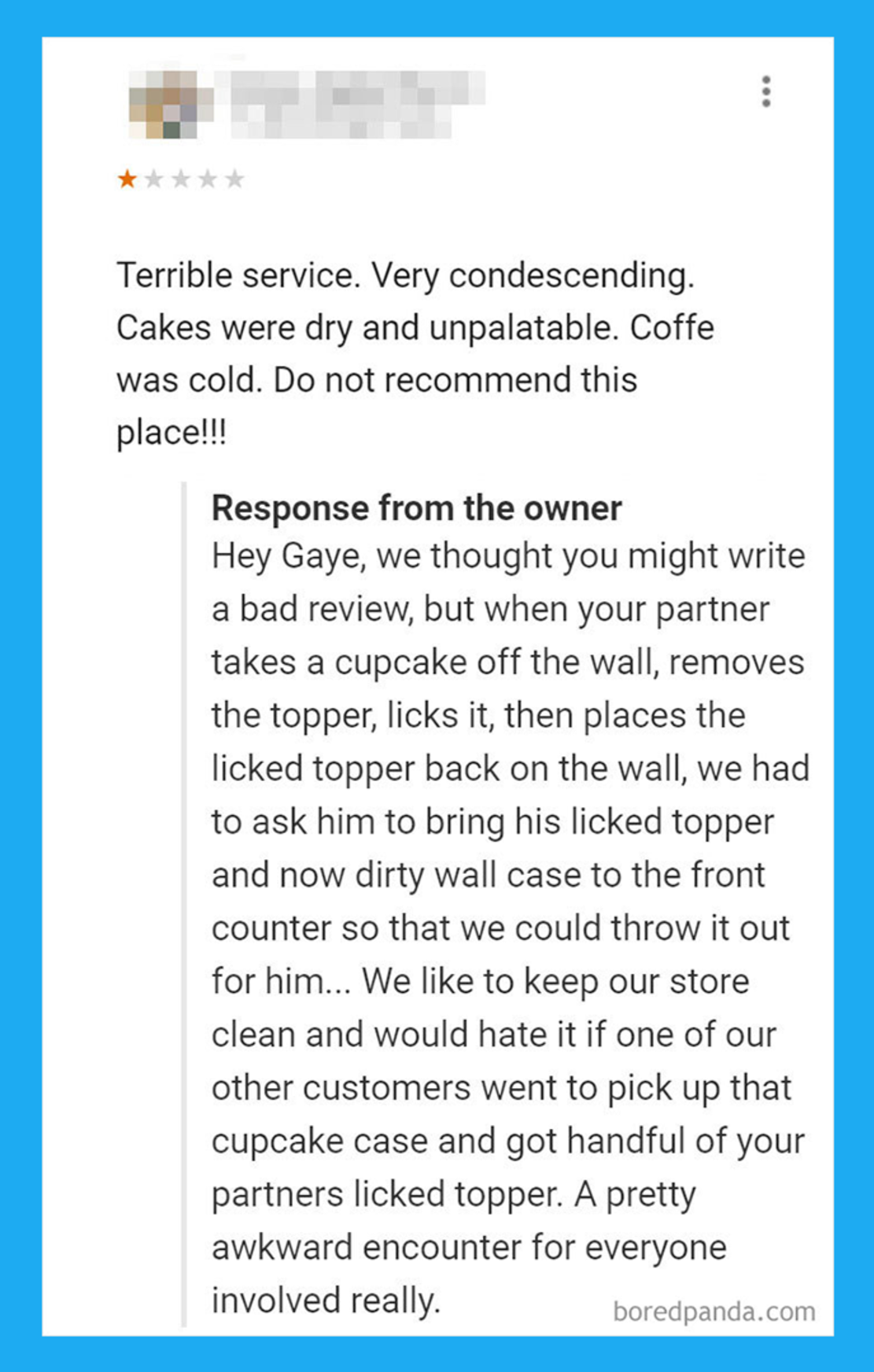 Some of your competition may decide to play dirty once in a while by leaving fake negative reviews on your profile. It’s cheap, tacky and entirely anti-competitive.

But if you spot them, there’s absolutely nothing stopping you from having a bit of fun with them and calling the fake reviewer/competitor out. We hope you’ve enjoyed this rundown of some of the best responses to negative online review. Some are definitely a matter of taste as to whether you could pull them off with your business, but they’re all honest, engaging and (largely) reasonable.

What is WiFi Marketing?

The WiFi you're offering customers is far more than just a free internet connection for them. For your business, it's the gateway to an incredible source of data that will supercharge your marketing effort.

5 Reasons to Know Your Customers

How well do you know your restaurant's customers? It might seem like an odd question, but the more you know about your diners, the more you can tune your marketing to bring more of them in.